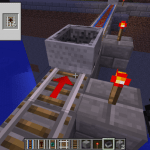 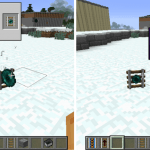 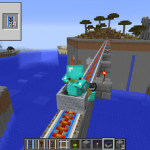 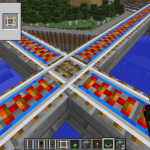 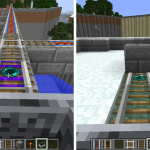 Useful Railroads adds some upgrades to the rail system in Minecraft. The highspeed rail should help you to cover long distances at a much faster pace. It is redstone powered and seemingly instant once the cart gets going.

There is also a direction rail that restricts a railway to one direction. It’s also redstone powered and will prevent carts from traveling against the indicated arrow. These are great for systems that may be high traffic and you may want to prevent others from traveling the same direction on one rail.

There’s also an intersection rail that seems like it should have been implemented long ago. It simply provides a rail piece that allows cross sections on your track.

And if you need a railway that’s more than instant there’s the ender rail that teleports a cart to a desired location once it passes over the track. There’s a few steps to take but essentially drop a ender track and an ender pearl on the spot you want to teleport to.

This will lock the coordinates to that rail. Then place the connecting ender rail at your desired location so they sync up!