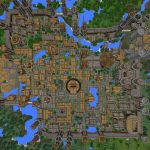 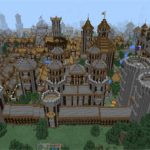 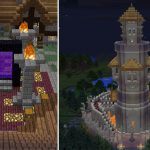 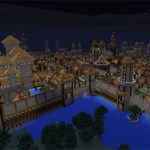 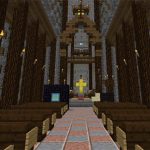 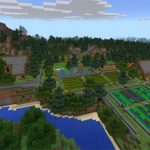 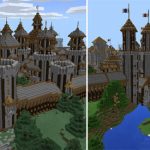 Skrimville is possibly the largest and most realistic medieval city created for Minecraft Pocket Edition. It has been created over a period of three years and the result is just mind-blowing. Everything in the city have been built with an extraordinary attention to detail. Even the interiors have furniture and there are more than enough to explore in the map.

It’s a large medieval city consisting of two castles, a large cathedral and lots of other structures. A large wall surrounds all parts of the city defending it from possible enemies and monsters.

In the center of the city you will find a portal which leads to the Nether.

A river connects the city with the water. This allows boats to come to the city very easily.

One of the bigger buildings in the city is the cathedral. The interior is just as majestic as the exterior. It’s nice to see that all interiors in the entire city is decorated with furniture.

Behind the walls of the city there are many other houses. They are situated here because they are considered a less importance for the city. Here you can find smaller cottages and farms.

The attention to detail is just incredible. It’s best seen by having a look at the walls and connecting bridges. They look absolutely amazing and something you’d expect see in a realistic medieval city.

Here is an overview of the entire city (excluding the structures behind the walls). There are tons of the structures in the city and everything have been built to fit nicely with the existing terrain.