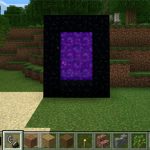 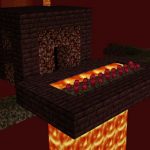 Nether Villages is a new concept or idea which recently surfaced in the Minecraft Pocket Edition community on Twitter. It’s a really clever idea which brings some more exploration opportunities to the Nether and now someone decided to create a mod adding this to the game. It’s currently in an early stage of development and that explains why it’s still very basic.

Begin by building the Nether portal by using 14 obsidian blocks. Then tap on the either of the two bottom blocks with a flint & steel to open the portal.

As you arrive in the Nether it will take a quite bit of luck to find a Nether village. The chance of generation is very low and sometimes they will generate inside the mountains, thus making them difficult to find.

This is an early version of the mod and that’s why the village is currently very small. It consists in fact of just one house and a farm.