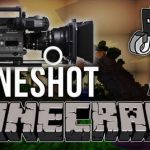 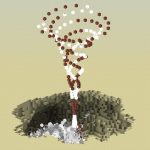 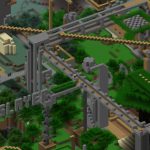 Mineshot Mod allow you screenshot activities in the game. Mineshot is basically a revamped version of Notch’s huge screenshot function that was available in the beta from 1.2 to 1.6.2 (For Mineshot 1.8), which allowed you to create extremely detailed screenshots far beyond the size of your screen by combining multiple screeenshot tiles to one large image.

So, this mod allows us to take pictures in high resolution of our buildings, landscapes or what you want. The very nature of this function, we can move the camera to focus on the screen from anywhere you want.

Mineshot also has a build-in orthographic camera, which allows you to create nice high-res isometric screenshots directly in-game (singleplayer only).

To configure the keys of camera movement and other functions, we will have to access the Minecraft game menu and enter the “Controls” section. The images will be saved as always in the .minecraft/screenshots folder.

Some scenarios and usages for such images could be:

Beware that Mineshot uses some weird hacks for the tiled rendering and the orthographic camera. Even though it seems to be stable on my system, there might be unwanted side-effects, especially in combination with other rendering-impairing mods, so use it at your very own risk!
Usage:

To capture a big screenshot, simply press F9. The key can be configured in the key bindings menu. During capture, the game will freeze a few seconds depending on how big the screenshot is.

To change the capture size, open the configuration menu with Shift+F9.

Width/Height: changes the size of the screenshot. You can basically enter any number here, even if your display or graphics card doesn’t support the resolution. Just keep in mind that extreme resolutions could stress your system, especially your hard drive. Opening image files that are dozens of gigabytes in size also may become a problem…
Mode: changes the image processing mode. “Direct” is very fast and memory effective, but requires the Targa image format (.tga), which is uncompressed and can be pretty huge. “ImageIO”, on the other hand, is pretty slow and requires lots of memory, but allows you to use supersampling (see below) and uses the more effective PNG image format. The general rule is: if you need extremely huge screenshots, use direct mode. Otherwise, stay with ImageIO.
Supersampling: sets the supersampling level for anti-aliasing. Higher levels increase the quality, but require more screenshots to be taken, therefore heavily increasing the memory usage. Requires the “ImageIO” processing mode.

If the “buffer size” text is colored red, this means that the current settings will most likely cause an “out of memory” error. Try reducing the resolution, switch to “direct” mode or lower the supersampling level until it’s good again or, if you feel lucky, try a capture regardless of the consequences.

The changes done here will be saved between the Minecraft sessions. Alternative, you can also edit the mineshot.cfg in the config folder before starting Minecraft.

To enable or disable the orthographic camera introduced in 1.4, just press numpad 5. If you have used Blender before, the keys are exactly the same: