How to Kill the Ender Dragon in Minecraft 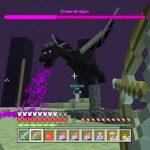 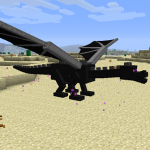 How to Kill the Ender Dragon in Minecraft

The Ender Dragon. Added in the Beta 1.9 pre-release, this black, six-limbed flying demon was the first “boss mob” to arrive in the lonely world of Minecraft.

The Ender Dragon spawns in one place: The End, the home dimension of the Endermen. It’s a strange world, an island literally in the middle of nowhere. To get there, you’ll have to jump through an End Portal, located within a Stronghold. And to survive, you’ll need the usual supplies with you: pick axes, food, and a few other odds-and-ends. Maybe a bucket of water.

But how do you kill the Ender Dragon once you’ve taken your fated journey to The End?

How to Defeat the Ender Dragon

The Ender Dragon may look familiar: He has the same black skin and glowing purple eyes of the Endermen. However, as dangerous as Endermen may be, the Ender Dragon won’t teleport away at the first sign of trouble. He’s immune to fire, and you’ll need to be wary not to aggravate the Endermen themselves while you’re fighting.

No, to defeat this creature, you’ll need to prepare.

You’ll need weapons and armor. The Ender Dragon hits hard, and has a high amount of health. It can also fly. The best weapons and armor in Minecraft are made of diamond, and you can augment these with enchantments, so they are undoubtedly your best bet. Craft a diamond sword, diamond armor, and a bow and arrow. Enchant the bow with infinite arrows if you can. Also, don’t forget to bring backups, as well as cobblestone, just in case.

You’ll need a plan. When you confront the Ender Dragon, you may notice the obsidian pillars littering The End. At the top of these pillars are Ender Crystals, which heal the Ender Dragon when it gets near. Every time you inflict damage, the dragon will fly to one of these crystals, and you’ll see a glowing beam as it happens — so destroy them before attacking!

Use your bow to destroy the crystals from the ground, or elevate yourself using cobblestone and break them on an even level. Be careful, though: the explosion of an Ender Crystal can be fatal. Once you’ve finished…

You’ll need to fight. Once you’ve destroyed all of the Ender Dragon’s health-regenerating Ender Crystals, the fight is on. It might be a good idea to stay elevated, atop one of the obsidian pillars.

If you find yourself getting charged, attack the dragon’s head with your sword, or continue firing with your bow. The Ender Dragon’s attack isn’t exactly fast, so you should have ample time to react. Strike him before he hits you and he’ll retreat.

Try not to aggravate the Endermen while you’re at it, and be careful not to fall off the edge of the map. If you’re paranoid, craft yourself a pumpkin helmet and the Endermen won’t pay any attention to you.