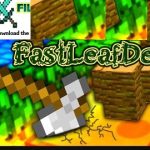 You can probably guess what the FastLeafDecay Mod does, as the name pretty much gives it all away. It’s one of the few and great mods that actually works on decreasing the clutter in your game. It’s no hidden truth that it can get pretty chaotic in Minecraft when you’re surrounded by clutter, you can’t see very well which means you can’t get where you need to go. Take a moment and imagine you cut down a tree in Minecraft, which you surely have, what happens to the leaves? They just kind of hang around and they don’t really have a useful reason to be there, but they are. So what can you do about it? Well, the first thing you can do is to download the FastLeafDecay Mod!

The FastLeafDecay Mod for Minecraft

If only cleaning up the real world was as easy as downloading a mod. This mod will take care of all your annoying leaf problems, no leaf blower required. To be precise, the FastLeafDecay Mod for Minecraft decreases the amount of time it takes for the in-game leaves to decay. This means that next time you go to chop down a tree, the leaves won’t just be hanging around mocking you for who knows how long. Instead, they’ll decay pretty rapidly, in fact, the default decay timer on the mod is set to five seconds long. You could say goodbye to all your leafy green problems in five seconds or less, or longer if you want to be weird. You can customize the interval in case you feel like it should be messed with. However long you want those leaves to hang around, you get to choose. It just saves you a bunch of time and tidies things up quite a bit. It’s like if you hired a maid to clean up after you chop down a tree, but not as expensive and even quicker!

Prerequisites to Downloading the FastLeafDecay Mod

You will need to have Minecraft Forge before you go to use the mod or you won’t be able to use it likes it’s supposed to be used. You’ll also need to apply it server-side if using it on a server, the other players won’t have to have it downloaded. It does have a few issues with the RandomThings mod, but you can find another mod to clear that issue up (more on that another time). All in all, it’s a pretty cool mod, especially if you’re a neat-freak.
FastLeafDecay Mod Installation:

Download and run the latest version of Forge API 1.11.0
Go to Start Menu > Type %appdata%/.minecraft/mods
Download the mod
Move the downloaded Jar (zip) file into the “mods” folder
Done and Enjoy the mod.